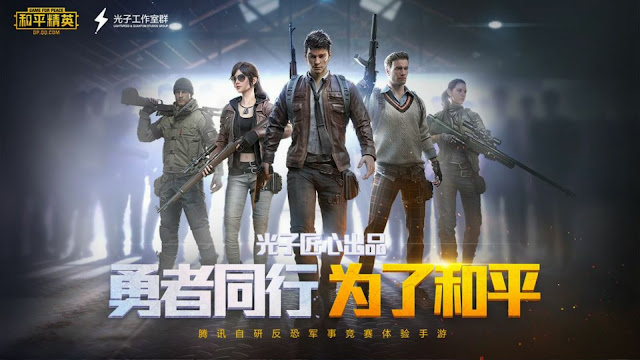 "Game For Peace" is a military competition mobile game developed by Tencent LightSpeed   & Quantum Studios. It pays tribute to the Sky Warriors who protect the national airspace.

PUBG Mobile developer Tensent Holdings Limited said on Wednesday that it will discontinue offering its trial version of the world's best-selling video game “PlayerUnknown’s Battlegrounds” (PUBG) in China, to get regulatory approval for starting sales Waiting for more than a year. Tencent has released a new game for the country, Game For Peace, to maintain a large-scale player database. Specifically, the developer claims that there is an element of patriotism in the new game. Anti-terror themed game is similar to PUBG, except for some exceptions.

1) Limited-time gameplay in the creative workshop-extreme cold mode: Based on classic gameplay, extreme cold weather regularly appears on snow maps. Special forces need to maintain their temperature through various channels. When the temperature is lower than normal, the health value will continue to decrease. ;

1. Use a lighter to make a fire indoors. Adding picked branches can increase heating time;

5. In order to facilitate the collection of materials and investigation of the surrounding environment, skis will be randomly brushed on the map, and drones will be brushed out of the extremely cold material box for special soldiers to use;

2) Time-limited gameplay in the creative workshop-special operations: In the island map, picking up special equipment dropped from the ground can be upgraded to different arms, and picking up three upgrade cores (round, square, triangle) can upgrade the level of arms and unlock more Multi-skilled

1. Assault soldiers: good at fast charge, can increase the speed of movement in a short time, and restore a certain health value every time a knockdown or elimination is completed;

2. Mobile Corps: Good at mobile transfer, fast movement can be achieved by the claws, and jet jumping can be used in the air, making it safer to fall at high altitudes;

3. Emergency soldiers: They are good at first aid support, shorten the time required to use medical props, and can remotely and instantly rescue teammates and provide additional health values ​​to quickly restore the team's combat effectiveness;

4. Engineering soldiers: good at position defense, can set up tactical shields on the battlefield to block enemy attacks, and can provide comprehensive maintenance supplies for vehicles;

5. Logistics soldiers: Good at logistics supplies, can create worktables for teammates to repair armor, and can use tools to create new helmets and armors;

Remarks: Special Operations is a limited-time gameplay of the Creative Workshop. This mode will be opened later, please pay attention to the official announcement, so stay tuned;

1. Slightly reduced the range of shotgun bullets and increased the hit rate of shotguns at medium and short distances;

2. Increased the attenuation range of the shotgun's damage distance, but within the maximum effective distance, the minimum damage per bullet is 4 (3 for short-barreled shotguns);

3. Increased the muzzle lift of all shotguns when firing (no change in recoil);

2) The side sight of Kar98K sniper rifle moved to the right;

3) The side sight supports changing the sight style in the setting;

5) The first-person dynamic gun holding state is optimized, and the gun holding position does not drop dynamically in the non-shooting state. You can choose to turn on the dynamic drop effect in "Basic Settings";

6) The performance effect of lighting the headlights is added when the vehicle is running;

7) When the character is under melee attack, the screen shaking effect is added to improve the performance of melee attack;

8) A new sighting function is added to the quick sight switch button. Clicking on the magnification icon again can remove the sighting, which is convenient for special forces who like to use sighting operations;

9) "Pickup settings" has been added with the automatic picking sight option. When this option is turned off, the pickup magnifier will not be automatically assembled to the firearm; it is convenient for special forces who like to use machine sighting operations;

10) Optimized the display rules of the pick list in battle: each time the pick list is triggered, the position of the list is displayed from the top item to improve the smoothness of searching for items;

11) Optimize the interactive experience of lying down: The triggering effect of the lying down button has been changed from "trigger trigger" to "press trigger" to improve the responsiveness of lying down and facilitate special forces to achieve various tactical behaviors more quickly;

13) In the "Custom Layout Settings", a second confirmation prompt was added when resetting the layout to prevent the wrong operation of the special forces to cause the layout to be reset;

17) Optimize the button interaction experience in the training field: merge the add friend button and the exit button into the same button entrance;

19) Skydiving following function optimization: Teams who have not followed the skydiving relationship in the birth square for a period of time will be assigned skydiving relationships based on historical combat performance, and players can choose to cancel it by themselves; this effect can be turned off in the basic settings;

2) Team competition: Added a share button in the settlement MVP interface to allow special forces to share the glory moments of themselves or their teammates;

1. Maps of the rainforest can be matched every Monday;

2. Every Tuesday and Wednesday can match the snow map;

3. Desert maps can be matched every Thursday and Friday;

4. The island map can be matched every Saturday and Sunday;

4) Entertainment mode-Extreme showdown: Join the snow map, and the special forces will randomly match the map to fight;

3. New functions and optimization in the lobby:

1. Add the "All" tab, which will display all online players including friends, recent, nearby, and regiments, as well as offline friends;

2. Under the "All" tab, friends added in the game will show the way to add that friend. If there is a remark name, the remark name will be displayed to facilitate the player to remember the friend. "

1. Optimize the experience when no team is searched, and guide players to modify search conditions or post recruitment;

2. After the recruitment is withdrawn, no other players will enter the team through the team lobby;

3. If the team is not successfully joined, the microphone confirmation window will not pop up;

3) When the skin of the firearm is in use for a limited time, it cannot appear in the list of the batch decomposition panel;

4) The display setting function in the upper left corner of the warehouse has been expanded to support a panel to configure multiple hall display items and in-battle display items;

5) One-click task reward function is added to the missions of the Corps;

9) In the team function in the lobby, add the "intercom" function to synchronize with the state in the battle, press and hold to speak;

10) For the friend list, two new functions are supported: support for gender filtering, fuzzy search for friend name or character ID; and the game friend list can display the friend platform identification;

11) Optimize the process of friend application and approval information:

2. If the player's friend application has been approved by the opponent, you will see the corresponding prompt in the message center of the email, and you can make quick notes on the opponent here;

14) Trailing props are globally visible by default. Players can set global visibility in the warehouse or only teammates.

4) Optimization of the video inspection system: the growth system, teaching system, and practice functions of the inspection system are added, which is more conducive for the special forces to learn and identify various violations and improve the efficiency of security strikes

5) Optimization of video inspection system: Optimize the display of enemy distance, and change the color of the enemy's perspective box from red to cyan to reduce interference with the enemy's position judgment;

6) Optimization of video inspection system: increase the coverage of the first person mode;

1) Fixed the problem that the airdrop in some battle situations did not load with a small probability;

2) Fixed an issue where teammates could get stuck together with small probability and could not move;

3) Fixed the problem that the vehicle would suddenly explode when hitting some terrain or trees;

4) Fixed the problem that the position of teammates' icons may be incorrect in some special forces;

5) Fixed the problem that grenades could not be thrown for a short time in some special forces;